I’ve been thinking a lot about this question, as the release date for An Unclean Strength draws nearer. You see, there’s a definite worry that I’ll be ‘damned if I do, damned if I don’t’ because of the way I am approaching the writing of this series. Some epic fantasy readers will undoubtedly be disappointed that these books are not the door-stoppers that dominate the genre. Some Sword & Sorcery fans will be irritated at the time I take to explore certain themes and events that feature neither swords nor sorcery, nor any action at all, on occasion.

The dividing line between epic fantasy and S&S is fairly blurred. But if you look at the typical conventions of the two sub-genres, here’s what you would probably come up with:

Based on these comparisons, the Skin Walker War pretty clearly falls into the epic fantasy category.

But there are other differences between the two sub-genres that are also important, that deal with non-plot related concerns and conventions. One of the biggest is length, which is directly related to pace.

Sword & Sorcery is the action thriller of fantasy. It was born in the pulps, and has never left them, tonally speaking. Fans of S&S enjoy the sub-genre not least because it is packed with action, with conflict, with flashing swords and, yes, deadly sorcery. For a real fan of S&S, many of the epic fantasy books out there are truly, honestly, slow and dull.

Epic fantasy readers like that magic and stabby stuff as well, don’t get me wrong. Just as Sword & Sorcery readers are not averse to an intricate plot woven through their action. The difference, to my mind, has always been about two things: emphasis and immersion.

I’ll give you an example: JV Jones’s A Sword of Shadows series features some of the best culture building I have ever read, especially in regard to Jones’s clansmen. When I spend time with, say, Clan Bludd, I don’t feel bored or impatient even if the most violent thing to happen is snarling dogs. I am immersed. I care.

In contrast, I will happily skip any feast in Martin’s A Song of Ice and Fire. I do not care what anyone eats, or how it was prepared. It adds nothing to my reading experience, and I am impatient to move on to something I do care about.

What I have attempted to do with this series is take out all the feasts, as it were, but leave the snarling dogs.

I love S&S, but often am dissatisfied with it because it is often skeletal – there is action, but not enough in the way of deeper characterization or world building. We too often end up with stick figures, caricatures, fighting over stakes we care nothing about.

I love epic fantasy, but am often frustrated when I come upon multiple pages that do not advance the plot, or the characterization, or world building – do not advance anything, really, except the page count. It’s like buying a bag of potato chips, to discover when you open it that half the contents are air.

So to answer to the question – is this new series epic fantasy or sword and sorcery? – I would have to say I’m trying to make it both. I’m trying to give readers what’s best about both sub-genres, and leave the less salubrious bits out.

Whether I am succeeding or not is up to the readers to decide.

So the first half of An Unclean Strength is kinda slow, for those familiar with my writing style. I'm feeling unreasonably antsy about that, but it needs to set up a lot of stuff for the slaughter-fest that is the second half of the book, and the bonkers annihilation-level stuff in book three. I'm hoping people don't mind. 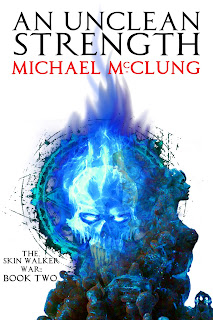 
Posted by Michael McClung at 2:45 PM No comments: