New Story: Fade Into You

I've just completed my first time travel story. Would anyone like to beta read it?  : )
Posted by Michael McClung at 4:39 PM 14 comments:

Because, you know, if I put on the blog, then it has to happen. No take-backs. 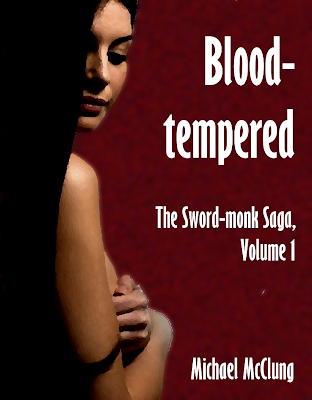 This one I have plotted out in my head. Three novellas: Blood-tempered, Weaving Steel, and Kissing the Blade. Many a moon ago I wrote about how I had a character stuck in my head, a sword-monk. I know his story better now, and am more confident about telling it. I just need more time.

Also, the wonderful poet Megan Arkenberg has graciously given permission for me to use her poem 'Song Before a Quest' as an epigraph for the story.
Posted by Michael McClung at 10:29 PM 4 comments:

Self Publishing: The old paradigm vs the new

My dream was always mass market. I wanted to walk into bookstores and see my books on the shelf, right after Anne McCaffrey's. I wanted it so bad that I would go in to bookstores and feel hate for the physical books of writers that I believed couldn't write as well as I did.

Both the hate and the dream are dead.

Last night, in bed, I got two new books. Books that I couldn't have bought in bookstores, not because they were self-published, but because they were out of 'print'. The bookstore as we know it, my friends, is marked for extinction. This I've blogged about before.

Before, if I used a print on demand service, I'd have had the books sitting in a box somewhere in my house because I wouldn't have been able to get them in stores.

Now, though the option is available, I can't be bothered. Why should I, when I can electronically distribute to virtually every English speaking country, virtually instantly? Why should I, when I can do the same to almost every country in Europe with a mouse click? Yes, I could go through Createspace and have physical books available through Amazon, but paper numbers are simply paltry compared to ebook numbers, for indie authors.

Publishers still have a lock on distribution to bookstores, but that doesn't mean very much anymore, and it means less every day.

I almost want to call print on demand a vanity thing,but it's not, for most, not anymore. Instead, it's either a nostalgia thing, or it's a sign that the author hasn't figured out which way the wind is blowing.

My dream was to hold my book in my hands. Now it is to get my works into the hands of as many people as humanly possible. The old paperback is, sadly or otherwise, on its way to the dustbin of history.
Posted by Michael McClung at 11:28 AM 3 comments:

Publishing myth #1: You need a traditional publisher for distribution

When I first started out in the writing game, I knew nothing (which is why I signed a contract in 2002 that meant my book would only be an ebook forever and ever amen). I had many beliefs, but essentially no knowledge regarding the publishing industry.

My education was painful, and costly. But it was also, it must be said a very thorough one.

When it became apparent that Random House had absolutely no interest in publishing my books in a paper format, I thought I was very clever in asking for those rights. "I'll just print them myself," I thought. "Who could resist my sword and sorcery genius, once they have it in their sweaty, trembling hands?"

Random House basically said "Sure, kid. Knock yourself out." They knew what I didn't know: Traditional publishers had a lock on distribution to all the retail chains. Borders and Barnes & Noble were never going to stock any book from Lulu or Xlibris. I count myself fortunate that I figured this out before I spent any money on printing Thagoth.


For a while I would tell people I'd written a book and had it published, but after the twentieth or thirtieth time having to explain that it only existed in electronic format, and no, they couldn't get it at their local bookstore, I just shut up about being a writer. And soon enough I stopped finishing anything new anyway, fiction-wise, so it didn't really matter.

When Random House finally responded to my emails regarding rights reversion of Thagoth, and my request that they stop selling it, their reply was, essentially, "Sure, kid. Knock yourself out."

So what has changed? Everything.

Let's look at where Random House distributes my ebook to right now, compared to where I can distribute to on my own (English speaking countries):


Am I worried about losing sales by leaving Random House? Let's put it this way: The population of the United Kingdom is 62 million.Canada, 33 million. Australia, 23 million. Ireland, 4.5 million.

By leaving Random House and distributing on my own, I increase my potential reader base by 122.5 million people. Now let's say 1% of this seething mass of English speaking humanity has some reasonable chance of being interested in reading my work. Likey it's less, but I'm not so good at math, so let's keep it simple. 1% equals 1.2 million people, rounding down. 1.2 million possible readers I was shut out from with Random House, because they did not distribute my book to those countries.

That's 1.2 million reasons for me to indie publish, on top of the ones I've discussed elsewhere. So when the powers that be at Random House finally deigned send me a reply to my several emails regarding Thagoth, this time around I didn't mind their supercilious tone.

The self epublishing 'bubble'

Ewan Morrison writes in The Guardian that we are at the start of an epublishing bubble. Go on and read it. I'll wait.

Now here's the thing: All the words have meaning and all the sentences are coherent, but this article doesn't make a lick of sense. Mister Morrison, if he can bear to look back at what he wrote five years from now, will cringe at the hash he made of predicting the future, and the logical contortions he forced himself through to get this piece written.

1. Trying to compare cultural shifts to macroeconomics is pointless and absurd, right on its crazy face.

2. For there to be a bubble, there has to be a boom and a bust in the cycle. I see the boom. For the life of me, I don't see a bust in the scenario. It's not like people are suddenly going to throw up their hands in despair en masse and stop writing.

3. There are three groups who are going to get hurt because of the paradigm shift away from print to electronic publishing: Traditional publishers, brick and mortar retailers, and any indie hopeful who pays hard money for anything to do with his/her writing without doing their homework. This does not a bubble make, any more than the printing press did.

Look, I'm quite certain that the makers of illuminated manuscripts first scoffed at, then became alarmists about the printing press. The makers of buggy whips, I'm certain, denigrated automobiles to no end. But at the end of the day, it's wasted effort to battle inevitability. Worse, it's wasted time.

Time that should be spent playing catch-up, hell bent for leather.
Posted by Michael McClung at 10:46 AM No comments:

I've finally received acknowledgement from Random House that I wish them to stop offering Thagoth for sale. I will not miss seeing my name mis-capitalized, nor will I miss the dreadful hash they made of the NCX file (the programming bit that lets you jump to different sections of the book).

Now, with the benefit of eight years of additional wisdom (ha!), I'll give it a nice edit and re-release it as the full version of The Thief who Spat in Luck's Good Eye.


For those kind visitors who have read Thagoth, I have a question: Is there anything you'd like to see changed in the revised edition? The comments section is open, or you can email me at mcclungmike [at] yahoo [dot] com if you want to avoid potential spoilers.
Posted by Michael McClung at 5:12 PM 3 comments:

Johnny Zero has entered the building

I love hardboiled detective stories - Chandler, Hammet, Spillane. What's more, I love hardboiled fantasy detective stories - Jim Butcher's Dresden Files & Simon Green's Nightside series especially. I've been working on something in the genre set in Singapore for a while now, but before that one, I'd thought of a premise, a tiny germ of an idea for something several years ago. It's been sitting on a shelf in my brain for a while now. Last week, I dusted it off after getting a prompt. A story ensued.

There's a lot going on to this story; the setting is an alternate America where magic is real, and mages have suffered from witch hunts, both political and literal, in the past. The specific city where the story takes place is Los Magi, commonly referred to as Miracle City, and it's a place that shares elements of modern day Las Vegas and Los Angeles of the 1930's. It's also not unlike Brigadoon.

I don't want to give away any plotty stuff, so I'll just say that I had a lot of fun writing down Johnny's casefile and meeting his partner. I'm quite sure Johnny will be back around to tell us about some of his other cases, sunglasses firmly in place, day or night.
Posted by Michael McClung at 9:04 PM 2 comments:

Requiem for a hamster

When the kids ask
I'll say you're on holiday
Not passed away
From some obscure hamstery malady.
So will everyone else -
If they know what's good for them.
Posted by Michael McClung at 1:01 PM No comments:

Of course, what else should I expect from the birthplace of my ancestors besides a dysfunctional relationship?

Waste Land is the #1 free iTunes sci fi short story there. It's also #1 in the broader free science fiction and literature category, and #5 in the free 'sci fi & fantasy' category, the broadest of the categories I can hope to aspire to (after that it's just 'books', which includes every book published). That's the first time I've broken the top ten in any country, in the SF & F category.

To which I can only say to Ireland, I love/hate you, too*.

(*Just kidding. Only love flows from me as from a font towards the Emerald Isle of my progenitors.)
Posted by Michael McClung at 10:51 AM 4 comments:

Hi there, cats & kittens. Currently have a monstrous headache that won't go away, but thought I'd let you know that Waste Land is the #1 Sci Fi short story in the US (iTunes free category), and is featured at the #1 spot in the 'New & Notable' section for Sci Fi shorts and in the broader 'Sci Fi & Lit' category.

Projecting into the future (always a risky proposition)

That, on the occasion of my 41st birthday, is my plan, and I'm sticking to it.
Posted by Michael McClung at 10:45 PM 1 comment: