Notes from the trenches #1

It's hard to give crunchy updates, ones that can objectively measure progress on a novel. The most obvious one is word count, and it is a useful measure, of course; a book is a collection of words, after all, and the more of them there are in a draft, the closer it likely is to being finished. Currently Amra 5 is sitting at just over 11,000 words. Averaging the other Amra books, we'd get a word count of just over 70,000 words, which give you an indication of sorts. But as I get older, I get fatter, and my books might suffer the same fate.

Sadly, word counts can also be deceptive. They might not be the right words, and until a writer (ok, me) hits the flow, it's entirely possible that the word count can go down as well as up. There are approximately 80,000 wrong words, all told, from the previous scrapped drafts of Amra 5, after all.

But let's pretend that these words are definitely golden. Going by the average word counts of the previous Amra books, that means we're approximately 1/7th of the way home. In what is a good sign, last night I had a fairly brain-bending idea about the ending that I think will make it more powerful than what I'd plotted, and when I woke up this morning, it was the first thing I thought about after 'gotta pee gotta pee gotta pee'. That's always a good sign.

Thus endeth the update. The rest is just blathering.

I mentioned flow somewhere up above, and I think I should explain what I mean by it. Basically I mean being in the zone - when I've got energized focus on the book and I'm feeling fully immersed in the story and I'm perfectly confident about what's happening as I write. It doesn't mean speed or continuous effort; I've always been the kind of writer that works in bursts. But it's a feeling that what you're doing, the story you're telling, isn't arbitrary but rather inevitable. A is followed by B is followed by C, and you don't have to give it much conscious thought. It's not effortless; I've never experienced an effortless writing session. Never. But it's more like cutting grass with a power mower, and less like cutting grass with the scissors they give you in kindergarten so you don't accidentally cut Jimmy's finger off. Or maybe not so accidentally. Jimmy was a little shit.

Anyway, a book doesn't have to be written that way, not even by me. But it sure helps.

My problem is that I've always written by what I think of as the flashlight method - meaning I don't need to have the whole plot mapped out, just a beginning and an end, maybe two or three oomph scenes, and then just far enough ahead of wherever I am in the process to get to the next scene or two. In other words, the plot is mostly in darkness, but I've got this flashlight that makes sure I don't fall into a pit or off the side of a cliff.

I mentioned that I've had to re-teach myself how to plot. For this book, at least, my old method just hasn't worked. I won't bore you with the details, but after months of struggling, I finally came to the conclusion that I had to plot this book to a much greater degree than I had anything else I've written. Not because the plot was substantially more intricate than any other Amra book, but because I kept writing in the wrong direction, realizing it only when I was deep, deep in the weeds.

Why? Because this is the fifth book in a series that's probably going to be a dozen or so books long. Flashlight plotting works for a standalone, or even a trilogy. I am here to inform you that it doesn't cut it for stories much bigger than that. You have to balance the needs of the individual book against the trajectory of the series, while keeping in mind all that has gone before. You'd need a bigger brain than was given to me, to do that on the fly.

Let's just say I now have some sympathy for the later books in the Wheel of Time series, and for George Martin. That shit ain't easy to balance properly. It's very tempting indeed to descend into minor plot points and just sort of... hang out there, where things aren't so crazy and messy. And then call it deep characterization/world building instead of fear and avoidance. You even get to point to the swelling word count and say 'but I'm making progress! This book is progressing!'

Well, your word count is. Your plot... 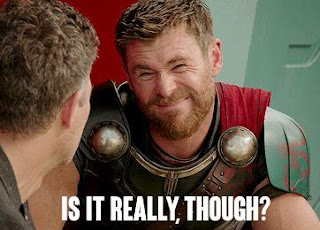 This, by the way, was a consistent issue with the trashed versions of Amra 5. Not the only one, by any stretch, but a recurring one. It's one I am trying very hard to avoid in the latest.

On a final note, I want to thank you folks who have left comments of support. I haven't responded individually; but it's not because I don't care. My personalized flavor of anxiety makes it very difficult for me to interact for periods of time, is all. I turn into a hermit. I withdraw. I'm, uh, working on it, but it might take me a while longer to get back to being sociable. It was worse when I was younger; at least I'm not dumping my phone into the toilet because notifications have brought on an anxiety/panic attack. I ask for your indulgence.