What happens when you have a few days of enforced idleness? In my case, the expectation is getting some writing done. Did that happen?

Not so much, it turns out.

Today was a day where absolutely nothing had to get done in my life - a rare thing indeed. It's now 10 pm. I got no forward progress in on any of my fiction. I did edit, format and upload my (free) phonics primer, but that's work that has been done for some time, creatively speaking.

I need to get Amra #3 moving. All I've gotten done all week is a map of Bellarius that I didn't actually need, and only drew out to confirm that, yes, I knew the layout and yes, I'm a sucky mapmaker.

I need to get the Waste Land sequel moving. Zilch.

*I can't even create a decent post title right now. I think something has eaten my creativity.
Posted by Michael McClung at 10:08 PM 1 comment:

Previously I listed out how many sales I would need to make at different price points in order to make it to minimum wage money as a writer. And that was instructive and all, but sales are not something that are easily corraled. Like cats, they come when they feel like it, an there is only so much you can do to coerce- er, influence sales to come your way.

The accounting department* has informed me that in the last quarter of 2012, my sales rose to 10.5% of minimum wage- the closest I've so far come to that lofty goal. My monkey brain immediately siezed on this nearly round number and informed me that this means I will need to write and release the same amount of material in 2013 as I did in 2012 to make it to 21% of MW. Sounds reasonable. If I can double my output in 2013, then I should be making 31.5% of MW, and so on.

But here's the thing: not all of my titles have been particularly successful. Short stories in particular have not sold for me. When they're free, they get downloaded, which might well lead to follow-on sales, but even at the low, low price of 99 cents (you can't actually price them lower than that, folks; the retailers won't let you) they just sort of lie there, gasping for air.

So, lesson for 2013: don't bother releasing shorts unless they're for free, or as a sequel to a successful free short. If you're giving 'em away for name recognition/exposure, make sure they're awesome, and tie them into a short story collection via an author's note at the end of the short story. Which leads me to short story collections, oddly enough.

They also don't sell all that well. Better than single short stories, though, and you can charge a little higher for them. So if you must write shorts, gather them up in a collection, put one or two out there for free, and point the reader of the free to the collection.

Novels. They're a lot of work. They're also what people are looking for. Learn to write them faster. Don't sacrifice quality, but don't whine that they're taking forever if you're wasting time having a True Blood marathon instead of writing.

I've got one that I have to finish – the third in the Amra series. Fantasy series don't take off, really, unless they're a trilogy at a minimum. So once I've got the third Amra book out the door, I can assess whether there's any monetary reason to continue with that series. Personal reasons are something else.

Nonfiction. A consistent seller for me is the reading instruction series I started. I will likely continue to release titles in this series because I (more or less) enjoy it, it's a good mental break from writing adult fiction, and each project is limited enough that completing them isn't too much of a hassel.

And for 2013 I'll be experimenting with a new story format, the serial.

I'll be honest- I'm not all that fond of serials, as a reader. Too many writers use the serial format (badly in terms of structure) in order to extract more money from the reader. They take a novel-length work and chop it up into pieces in order to generate more sales. But a serial has its own structure that's distinctly different in important ways from a novel. In 2013, I'm going to try to write a proper serial (as I see them). Two, actually, with distinctly different structures, as I experiment with the serial format.

So. 2013: 1 novel, 1-2 reading instruction books, a short story collection, and an experiment or two with serial format fiction. That's my minimum, writing gods willing. I think that I can hit 30% of minimum wge this year if I do that. I'll keep you posted.

*Right next to the monkey brain department
Posted by Michael McClung at 12:34 PM No comments:

Obviously, I'm not writing for the money. 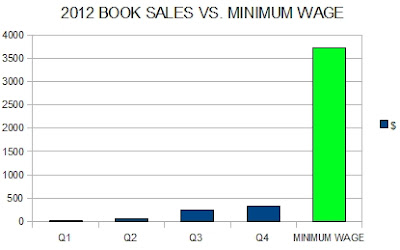 2012 went in the right direction. No breakouts, but quarter-on-quarter sales continued to increase. Honestly it would have been freakish good luck to break out of triple digit dollar sales with only one full-length title, one short story collection and a handful of shorts on offer. 2012 was mainly about exposure.

2013, if things go well, will see the Amra series boosted to three titles, a second short story collection, and an experiment with a serial or two. I'll keep you posted. In the meantime, here's the first cover for the Tarqis project: 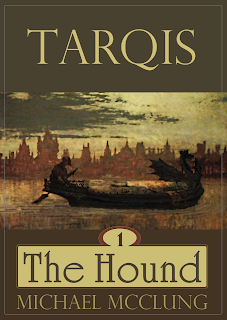