Time to take stock of what I need to finish. Until these are done, no new (fantasy) stories for me!

First up is The Blade That Whispers Hate. This is the prequel to The Thief Who Spat in Luck's Good Eye. It's sword & sorcery, of course, but it's also something of a murder mystery.

Then there's the sequel to 'Thief Who Spat' which is called The Knife That Parts The Night. That one is about, well, let's just say when you think everything is done and dusted, that's when life tends to punch you in the face.

And completely away from Amra and Holgren's various troubles, I've been working on a... complex epic fantasy that probably has more in common, DNA-wise, with Rashomon and Philip K. Dick than Tolkien or Jordan. This one has taken years, and may take years more. It comes along at its own pace.

And I'm also working on a fantasy novella series (The Sword-monk). Three are planned: Blood-Tempered, Weaving Steel and Kissing the Blade. They also come along at their own pace. 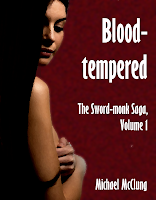 So yeah, that's what's on my plate for the foreseeable future. Of course plans change. Sometimes I get stuck, or get enthusiastic about a new project. But I need and want to finish these. As always it's a question of time, discipline, and life poking its nose in, demanding attention.
Posted by Michael McClung at 10:14 AM

expat@large said...
This comment has been removed by the author.
5:10 PM

[Dude! Download your goddam wedding photos! Bell has been annoying me for ages! You DO have the Dropbox link in an email I sent somewhere!]

In other news: Man, you've set yourself some tasks there. However as we watch you jump from story to story so rapidly, I for one wonder what you could produce if you put one or two or five of those projects aside and flesh out your larger works *one at a time*. Are you distracting yourself by having too many irons in the fire?

Says he, who couldn't finish writing a shopping list.