So as you may know, my short story collection 'The Sorcerer's Lament & Other Tales' had begun to get a little traction, was making some sales, was even showing up on iTunes charts in various English speaking countries.

Had been. Was. Notice the past tense there?

Here's a picture of what happened. We all like car crash pictures, right? No? Well here it is anyway: 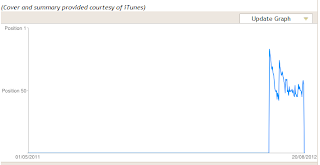 What happened? Suddenly my book was made free at iTunes. In consequence, it dropped off the chart. A couple other of my books also went free, mysteriously, at the same time, but this is the one that hurt.

Why was my book made free at iTunes? I have no clue.

Now I suppose Apple may have screwed up (though I think it unlikely). I have to go through Smashwords to make price changes, and considering how buggy Smashwords is, Occam's razor would suggest it's Mark Coker's company that should shoulder the responsibility on this one.

But that only leads me to the next Smashwords fail - their customer support is simply unacceptably slow. The 'official' response time is 4-7 days, but then the 'official' wait for premium catalog approval was 15 days, when reality, and things like calendars, pointed to the fact that it was more like 21 days.

I put in my support request on Friday. I sincerely doubt I'll hear from them this week.

And in any case, I shouldn't have to hear from them. I updated all my books' prices on Thursday (my time), and since Smashwords supposedly now has same-day multiple metadata shipments to Apple, my prices should already have self-corrected. Another Smashwords fail.

So what should I do? Go straight to Apple? Well, there are two problems with that. First, Smashwords tells you NOT to contact the vendor directly (though I had to with Barnes & Noble once as Smashwords support staff didn't even understand my problem once they finally got around to answering my request - yet another Smashwords fail). Second problem, Apple only talks to the distributor.

Here, ultimately, is the problem with Smashwords: they are a distribution company that, frankly, isn't very good at their core service: distributing what amounts to data. An ebook is, at its heart, a very long string of 1s and 0s. The metadata attached to that ebook is a series of much shorter strings of 1s and 0s. Communication of 1s and 0s in today's world is, practically speaking, instantaneous.

So every cent of my writing income will now go to getting incorporated here in Singapore and distributing directly to online retailers, bypassing Smashwords entirely and saving myself 10% and chronic heartburn in the process.

You had me for a year, Mark. I wanted to be happy with you and your company. But you just made it too hard to do so, too many times.
Posted by Michael McClung at 2:49 PM

Why bother with smashwords? Why not publish directly on Amazon?

I do publish on Amazon. It's just that I make my sales at Apple and, to a lesser extent, B&N. Nothing's really caught on at Amazon over the last year or so.